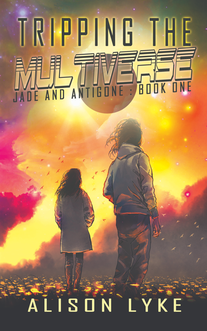 Tripping the Multiverse
​(Jade and Antigone Book One)

​As a science journalist, Jade has seen more than her fair share of peculiar oddities—none weirder than her socially inept fellow reporter Antigone. When the test of a teleporter using an electron collider goes awry, the two women find their world changed in subtle ways, with anomalies breaking out in their personal lives. Their increasingly unstable dimension gives Jade the ability to shapeshift while Antigone can see portals into other worlds.

A fellow journalist who attended the experiment is trapped in another dimension and Jade and Antigone hold the key to saving him. Of course, their task is not just a simple rescue mission. Realizing they will continue to drift into increasingly stranger worlds until they straighten out the paradox, the women reluctantly agree to travel through the multiverse in search of a solution.
Order on Amazon
Review of Tripping the Multiverse from The Prairies Book Review
(click link for full review):

A dazzling start to a promising series…
Lyke creates an ingenious world of alternate worlds in this imaginative, well-crafted science fiction. After a quantum physics experiment goes haywire and a science journalist becomes trapped in another dimension, it’s up to socially inept Antigone and her fellow journalist Jade, a woman of peer-reviewed facts and natural law, to rescue their colleague from another dimension. But the paradox has shifted, and the pair is left drifting away into increasingly strange worlds. Lyke seems to have fun developing her characters, their backstory, the endearing bond of friendship between her two protagonists as well as the intriguing world of multi dimensions, parallel universes, and the concept of dimensional dislocation.... 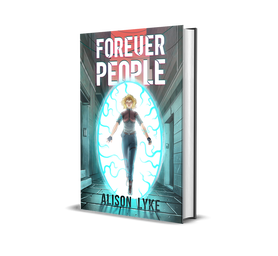 Camille goes to increasingly dangerous lengths in pursuit of Toy. She soon finds that the Node is full of warm reunions with loved ones and otherworldly creations. It’s also full of lies.
Order on Amazon
Forever People Review from The Book Dragon:  (Click Link for Full Review)
5 Stars out of 5
In this crazy Sci-Fi novel, I found myself faced with ethical dilemmas, a fondness for terrorist hackers, and a yearning to off myself. Needless to say, this one was quite a ride! In a summary of the plot, a computer code was created around cities, allowing those who died to have their consciousness automatically uploaded into this digitized afterlife. So as long as you died within the safety of these “Node nets,” you were granted life everlasting. Most of the Earth has been netted as such, though there are still a few wild countries left unnetted. Death has become a natural, common occurrence, and people all from all aspects of life are doing whatever they can to increase their Node Points–the currency of the afterlife. If you don’t have enough NPs when you die… Well, the belief is that you spend eternity in a sort of poverty-stricken hell-hole. One hacker from the extremist group of Nirvana, Toy, decides to nullify NPs, rendering everyone on equal footing. She uploads a computer virus–the Bliss Virus–into her brain and broadcasts her message all across Zeta City. She plans to kill herself and when she gets to the Node, the Bliss Virus inside her brain will be uploaded along with her consciousness, thereby accessing the Node and wiping out everyone’s NPs–dead or alive. Cody, a mysterious government agent, enlists the help of illegal bounty hunter/mercenary Camille to stop this virus from relegating everyone’s hard work to nothing. Will they be successful? What will be the consequences if they are? 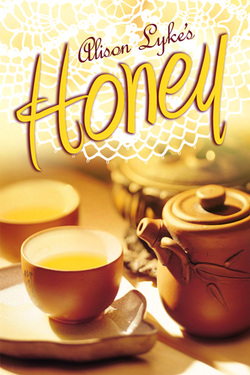 In the spirit of ancient mythology, modern Honey wrangles through surreal realms, guided and hindered by agents who represent the forces of the universe.

You've been chosen as a human servant to the highest of gods. Until you fulfill that purpose you will perpetually stand where you don't belong: at the threshold between this world and other worlds," The Time Keeper said.

A teashop barista named Honey is visited by Pearl, a ghost who demands that Honey quit brewing tea. Honey and her friends begin to question her sanity as Pearl’s visitations continue, and a plethora of other spirits start dropping by to take Honey on impossible journeys to other dimensions. Honey soon learns that she is a hapless victim in a war between the world’s most powerful gods.

Honey Review from an Amazon Reader: An intriguing story that flits between reality and fantasy worlds. I don't usually read fantasy novels but I found this story compelling and entertaining. After Honey is saved from a car crash by a spirit, on the condition that she never brews tea again, her life starts to get interrupted by visits from different spirits and journeys to other worlds. Soon these interruptions become her whole world. I really got swept away into these fantasy lands, on this captivating journey, wondering where it is ultimately leading Honey to and for what purpose. Some of the spirits or gods tell some quite philosophical tales. It's a very gripping story wondering if Honey will ever make it back to reality, or if she even wants to.

Honey Review from a Goodreads Reader: Contemporary mythology is not a common find, and it was a refreshing alternate to the usual fantasy books.
Alison's passion on the subject of mythology is apparent in her note to the reader, "About Honey", included in the book:
"My father was an artist but mythology and religion were his favorite subjects. Growing up hearing all kinds of myths and stories, I came to realize that characters from different pantheons shared common traits because they represent the forces that are the building blocks of humanity – sexuality, communication, agriculture, etc. I wrote Honey to breathe some life into these sleeping gods because the powers that they represent still deeply influence our lives."
If these subjects interest you, I highly recommend Honey!

Honey Review from an Amazon Reader: "Honey is Alison Lyke's debut novel and granted, I had the pleasure of copy editing a late draft, but I found, even as I was searching for errant commas and semicolons, that this novel sets itself apart from the myriad first novels that are often rife with autobiographical angst. This is not the case with Honey. Lyke is a natural storyteller and what took shape for me while editing was a compelling work that places a contemporary setting on a surreal stage.
What starts as a seemingly innocent battle of wills between two people has far-reaching implications for Honey, whose life takes a sudden turn into a complex, often frightening, yet colorful world of ghosts and gods. Honey is a hapless Alice in a Wonderland occupied by a pantheon of gods and others. She's supported by her sister and brother with whom she has odd relationships (the family dynamic having been upset early on in Honey's life) and who question Honey's sanity as, indeed, Honey finds herself doing, and often, throughout the narrative.
I'm not going to give too much away, because this is a great read and people really should pick up this book, if only to find out what happens to Honey. Draw your own, conclusions, of course, but I think this is a solid first published work and I do believe that Lyke has a promising future. At the risk of making a comparison with a great author, let me put it this way: if you like Neil Gaiman's work, you'll like Honey."

Honey Review from an Amazon Reader: I must admit that I took undertook the reading of this book with a skeptical mindset. It has been many years since a story was able to garner my attention. Its not that i don't enjoy reading. I just lose interest around the second chapter, which is usually where i figure out the plot. That was defiantly NOT the case with "Honey". I could not put it down. Literally! I picked it up and did not put it down until I was done. The book was amazing. Alison Lyke shared just enough of her underlying theme to peak my interest and make me want to keep tagging along for the journey. And what an adventure it was. I hope this in not the only book this woman writes!
Alison Lyke's books on Goodreads